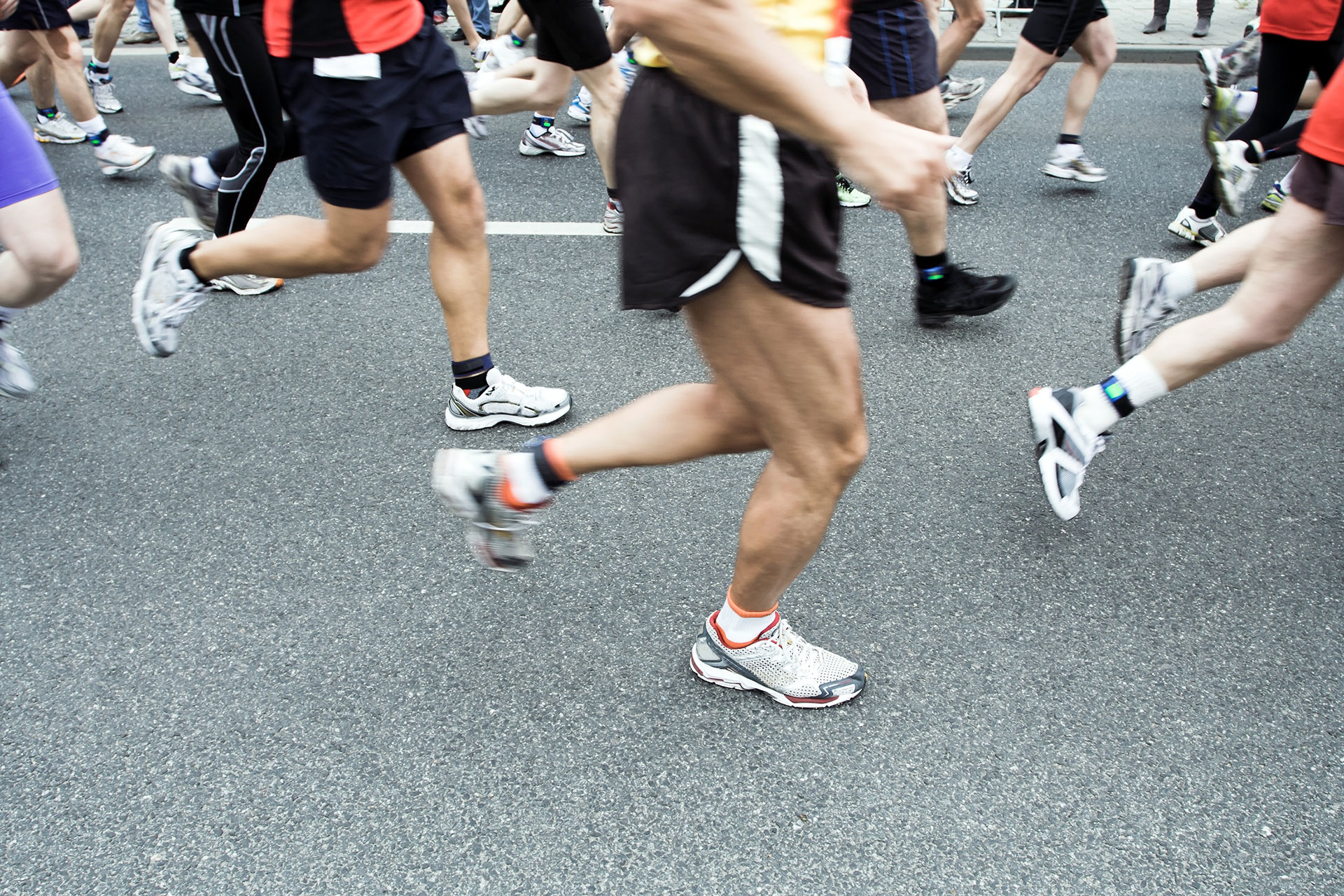 LOS ANGELES (April 24, 2001) — John Davidson’s mind has blocked out everything related to the Los Angeles Marathon on March 4.

The 49-year-old Valencia, CA, resident does not remember making the 35-mile drive from home that morning. He has no recollection of stretching, warming up, or running the first 19 miles of the 26.2-mile race.

Only from other people’s accounts and the bruises on his face does he know that just past the Mile 19 marker his heart quit and he crumpled, striking his head and face on the pavement.

Estimates vary on how long he was down before help arrived. But within a matter of minutes, as bystanders grabbed cell phones and called 911, a runner who had trained as an Emergency Medical Technician came upon the scene, assessed the situation, and quickly started performing CPR.

The next medical professional to arrive happened to be a doctor whose specialty is pulmonary medicine and critical care. In fact, Steven Simons, M.D., who was running the race that day with his son, served as medical director for every LA Marathon until last year. He is medical director of medical affairs at Cedars-Sinai Medical Center, and a professor of medicine at the University of California, Los Angeles.

When he arrived, the runner who had started chest compressions was stopping intermittently to try to check for a pulse or any spontaneous respirations. A bystander was calling 911 for a second time, about five minutes after the first call for help. Although Davidson’s condition appeared grave — his face was purple from lack of oxygen and his pupils were dilated — Dr. Simons joined the CPR effort and a few minutes later another volunteer started performing mouth-to-mouth resuscitation. Paramedics with a defibrillator arrived about 15 to 17 minutes after Davidson collapsed.

“He had no pulse and was not breathing spontaneously,” according to Dr. Simons. “Once the paramedics arrived, we were able to defibrillate and give him a couple of doses of intravenous epinephrine. After the second shock, his heart went into a very slow rhythm, and he had a palpable pulse. The paramedics loaded him into the ambulance and took him away.”

Dr. Simons finished the marathon — he has run all 16 — then started calling around to find out if Davidson had survived and which hospital he was in.

Although it wasn’t the closest hospital, Cedars-Sinai has a cardiac catheterization lab. The decision was made to take him there. As always in this type of situation, when the call came into the hospital’s Emergency Department, a team of emergency and cardiology specialists was quickly assembled. Mehran Khorsandi, M.D., an attending physician at Cedars-Sinai and the cardiologist on call, arrived within minutes of Davidson’s ambulance.

“Within a matter of minutes, he had a CAT scan done to see if there was bleeding in his head from the point-blank drop to the asphalt,” said Dr. Khorsandi, an interventional cardiologist who specializes in invasive techniques to open closed blood vessels. “Then we took him to the cardiac cath lab and opened an occluded vessel, which was the culprit in his heart attack. As far as his heart was concerned, we stabilized him quite rapidly. By opening the vessel and supplying blood to the heart, we in a sense stopped his heart attack. But because he had been running the marathon, he had numerous other complications.”

In fact, in addition to performing an angioplasty to unblock the vessel, Dr. Khorsandi and his team simultaneously treated Davidson for electrolyte abnormalities, dehydration, and generalized seizures.

“He was in a coma for a little over six days,” according to Dr. Khorsandi, who also serves as assistant clinical professor of medicine at the UCLA School of Medicine. “The question was, how much anoxic (oxygen deprivation) damage had he had? When people are ‘out’ the way he was, they don’t get enough blood to the head. If they don’t get it back in a timely fashion, the brain may never come back. This was especially a question because he had run 19 miles. This creates such a deficit, the body is sucking up every ounce of oxygen it can get.”

Having performed CPR on the scene and looked in on Davidson the next day at the hospital, Dr. Simons had little hope for a good outcome. “I’m an optimist. I take care of patients like this all the time because part of my practice is critical care. But I was certain he was either going to be brain dead or in a chronic vegetative state,” he said.

On the sixth day of his hospitalization, however, he began to emerge from the coma. Although still heavily medicated and groggy, he became alert enough to recognize his wife, Barbara (Bobbie), and follow her with his eyes as she moved around his room. After nine days in the Cardiac Intensive Care Unit, Davidson was transferred to a step-down unit where he was monitored for a week before being moved to the Rehabilitation Unit on March 19.

“There probably are a few minor things,” such as slower speech and short-term memory lapses, said Davidson, an electrician for the city of Burbank. “But even before this whole incident, I’ve always been very slow to answer questions and to respond to things. My wife says I’m methodical.”

Bobbie was at a meeting at church on the morning of the marathon. “By the time I got home and got all the information I needed and called the hospital, immediately I just had this kind of overwhelming sense of peace. We’re Christians and I just knew that he was in God’s hands. I honestly did. I was upset that he’d had a heart attack and not knowing what the outcome would be, but I just had a sense of peace.”

Although this was Davidson’s first marathon, he has run from time to time for about 10 years. He has always watched his diet and exercise, and had no visible symptoms of a heart condition. There was a family history, though. His father died of a heart attack at age 50, 25 years ago to the day of the marathon, March 4.

The couple’s two children, Sara, 19, and Jeff, 17, visited regularly during their dad’s hospital stay. Bobbie made the trip every day and finally took John back home on March 29.

“There is no discernible cardiac damage — I mean none — on EKG, on echocardiogram, on examination,” noted Dr. Khorsandi. “If someone looks at him a few weeks from now, they will not be aware that he had a heart attack. And there’s no neurologic damage. He remembers training for the marathon. He remembers a friend suggesting that they run it. He remembers events until a few days before the marathon. He just doesn’t remember actually entering the marathon.”

Davidson’s survival and surprising recovery may relate to a small degree to the fact that he was in otherwise good physical condition. It may have something to do with the efforts of the CPR-trained runner and Dr. Simons who provided chest compressions until paramedics arrived at the scene. Fast action by the emergency and cardiology teams at the hospital were another factor in Davidson’s favor.

But Dr. Simons sees plenty of reason for humility in this case.

“I think his recovery is miraculous. I don’t think any one of us who took care of him can take credit for this. This is just an unbelievable recovery,” he said. “If one looks at the survival and neurologic recovery of patients who have received 15 minutes or 17 minutes of CPR, it’s terrible. Even with excellent CPR in a hospital situation, the data are such that this kind of recovery is truly miraculous.”

According to Dr. Khorsandi, the nurses and other staff cheered Davidson on as he began to beat the odds. “We’re just happy that he’s alive and doing well. It’s very gratifying.”

Before Davidson was released from the hospital, he received a visit from the first caregiver to reach him after he fell. She and other witnesses describe the events, filling in more and more of the memory gaps of that day and the following weeks. He has been told, for instance, that the paramedics remarked on the “textbook perfect” care he received at the scene.

“It takes my breath away every time we hear another part of the story,” Davidson said. “I’m just amazed. The way I hear it, I should have been dead, by all rights.”